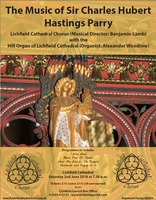 From Jerusalem to the hymn tune Repton and from Blest Pair of Sirens to the coronation anthem I Was Glad, Parry’s choral compositions had a profound influence upon our music in the 19th century. This concert of stirring and memorable works, with Lichfield Cathedral Chorus at full strength and supported by the mighty Hill organ of Lichfield Cathedral, will be a fine way to spend a summer’s evening.

So it really is true…small is officially beautiful. As a relatively diminutive person myself, I have always hoped this might be the case, but the Lichfield Cathedral Chorus’s Summer Concert last Saturday proved it. It was barely an hour long, but was crammed with works , both popular and rarely heard, by the great choral composer Sir Charles Hubert Hastings Parry, the 100th anniversary of whose death falls this year.

I suppose that in any choral concert of works by Parry the ever-popular piece I was glad is highly likely to be on the menu, and we were not disappointed. Particularly in this year of royal events, this piece hits all the right buttons of splendour and magnificence suitable for big events in such a great building as Lichfield Cathedral, and Ben Lamb’s choir gave us a rousing start and a relentlessness in the crescendos which was quite admirable, particularly as the choir was at far from full strength on this occasion. Some wonderfully wide open mouths and great involvement of most of the choir gave it the immediacy it needs, and it was good to hear the crisp Vivats which are so often omitted. The glorious ending may have lacked a little in intensity, perhaps because the impending top B♭ for sopranos was, at Lichfield pitch1, more than a little daunting.

But there was much more to this little gem of a concert. Two pieces from the delightful Songs of Farewell, composed very near the end of Parry’s life, were performed by the solo quartet of Harriet Hunter, Ailsa Cochrane, Michael Guest and Francis Ambrose, with Ben Lamb himself joining in for Never weather-beaten sail. These singers are all very familiar to each other, resulting in an easy ensemble, the men being particularly well-blended. There was perhaps a little unnecessary over-projection in the quintet, causing us to lose the sense of calmness at times, but it finally resolved onto a wonderfully peaceful ending.

Two further choral pieces may have been less well known…Hear my words opened the evening with its rousing rendition of the great hymn O Praise ye the Lord, and the glorious My soul, there is a country tested the singers with its deceptively simple chordal setting of the beautiful 17th century poem originally entitled Peace. There were great dynamic contrasts here, and it just held together, despite some tricky counting moments.

I have to say that I haven’t ever consciously heard an organ fugue by Parry before, and Alex Woodrow gave a fine account of his Fantasia and Fugue in G. However, despite the fugue fulfilling many of the usual compositional rules, sadly this piece has not enthused me to seek out more; indeed, it made me wonder yet again at the brilliance of JS Bach who could always produce a fulfilling and exciting work within such an apparently constricted structure.

The climax of this evening, however, came with that other great choral work, Blest Pair of Sirens. Here the choir was singing in eight well-balanced parts, giving a richness to the texture. The singing was confident, the accompaniment sympathetic, and the relentless brilliance of the great final moments achieved.

This evening was truly a Box of Delights, and it was a great joy to leave the cathedral after hearing so much great English music to find the sun shining in a blue sky on a lovely summer’s evening!

1. The Cathedral’s Hill organ is at Old Philharmonic pitch, about a quarter-tone sharper than standard concert pitch — Ed.